The Fearless Reloaded conference was an awesome and engaging experience. The 3-day conference consisted of a series of panels and networking opportunities. The conference presented many opportunities to engage with Black-Women owned businesses.

Day 2 – Fearless Conference – This was a fulfilling 12-hour day!

Personal Note: What an awesome way to wake up on a Saturday. Excellent view (conference held on 27th floor), bomb music (DJ was poppin), and being in a room filled with #BlackGirlMagic! 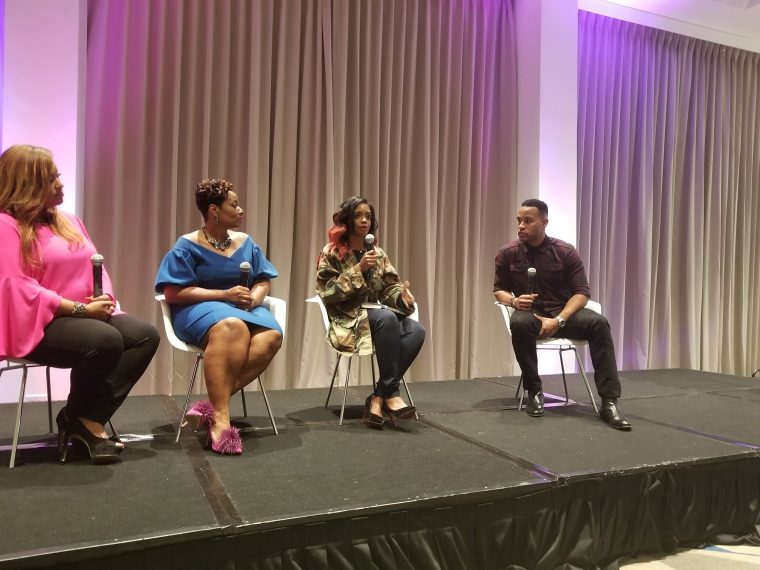 My best friend has been seeing a guy off and on for 5 years. OMG……he is such a freaking DOGGGGGG. He is tall, dark, handsome, and very successful. A recipe for DOGG…..LOL. They have a very interesting relationship, he would randomly come around and whisk her away on mini vacations. As a responsible best friend, I expressed to her that something was up with him and she insisted that they had an understanding and I backed off…… I had a feeling he was in a relationship but didn’t want to stick my nose too far into a situation that didn’t belong to me.

Here we are 5 years after they met and the poop has hit the fan. They were getting ready for a long weekend trip together, and she was looking for a good book for the ride. She enjoyed reading the first book he wrote, so she asked him for suggestions for books by other authors in his genre. She didn’t hear back from him soon enough and decided to google him to see what other book suggestions arise. Well, the google search gave her more than she bargained for.
She found out he got married last year and has a newborn baby. Yes, married last year and they’ve been dating (well knowing each other) for 5 years. I could not believe it. How do you lie about your whole life?

To his credit, he never promised my girl long-term, he never made any commitments or sold any dreams, but he lied about his relationship status for years. He never said he was in a committed relationship, never once said he even had a girlfriend, let along a fiancé or a wife, and these were questions she asked on a regular basis. When they met, he told her that he had just gone through a divorce and was enjoying being single. When she confronted him, he said we have a good thing going, and my relationship with my WIFE is complicated. Let’s continue what we have. This man must be crazy to think she would be comforatble being his mistress.

What’s even sadder is his amazing, well educated, well-accomplished wife doesn’t know who he really is. This man has a secret life where he is taking other women on trips with their money and sleeping with them. He is putting his family at risk, and I wonder is it really worth the thrill.

I’m shocked that it took my girl this long to google this man. These days, that’s the first thing you do.

Please note: I received her permission to blog about her experience.